Game of the Week returns today with ANOTHER five-goal thriller in the Campeonato Brasileiro 2011. We were really spoiled for choice this week in South America, in Brazil alone we had a bizarre 3×3 between Cruzeiro and Santos, Botafogo and Bahia drew 2×2, and leaders Vasco were humbled 3×0 away to Internacional. In Argentina, the clásico de Avellaneda finished 1×1 between Racing and Independiente, and we had some fascinating World Cup qualifiers to keep us busy on Friday. This week however, our attention turns to another riveting edition of the Flamengo x Fluminense derby in Rio de Janeiro.

Flamengo vs Fluminense (or Fla-Flu as it is often referred to) is a tie synonymous with the image of o jogo bonito in Brazil. For some it is Brazil’s most important clássico, and for the rest it is a fixture that is dripping with history, excitement and colour. In recent years however, it has not been quite as glamorous. With Brazilian football culture obsessed by local rivalry and one-upmanship, the biggest and most important derby in Rio de Janeiro appears to be the one between the two clubs contesting the most titles.

In recent decades, this has meant Flamengo x Vasco has often been cited as the city’s biggest, and even Flamengo x Botafogo now takes the top spot in some supporter’s minds. However with Flamengo and Fluminense being the last two clubs to win the Brazilian championship, Fla-Flu could certainly be making a comeback. On Sunday, with both sides deperate for a win to nudge them into contention for another championship, this was surely the most important Fla-Flu in years.

Flamengo came into this match on a decent run of results, attempting to reclaim the position that they held earlier in the season at the top of the table. Fluminense, level on points with Flamengo, have been the form team of the second half of the season, and morale was high after last week’s last-minute winner against Santos.

Both sides had players missing for this one, Flamengo were without Willians, Felipe, and Ronaldinho Gaúcho – all important first team regulars – while Fluminense were minus centre-back pairing Gum and Digão, and team captain Fred.

Flamengo lined up in a rough 4-3-2-1 shape with three holding midfielders, seeking to keep the midfield tight. 20 year old Diego Maurício was handed a start going forward alongside ex-Fluminense star Thiago Neves, and Deivid started at centre-forward. Fluminense came out in a 4-2-3-1 formation, virtually the same as the side that played the second half against Santos last weekend. 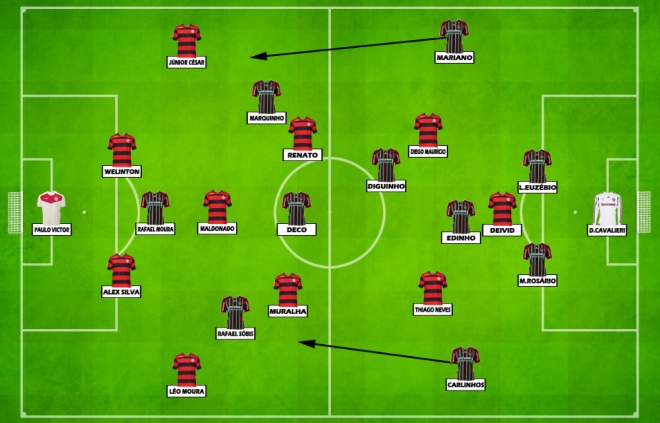 With Flamengo setting up rather defensively, Flu were offered the majority of possession in the first half, but with Flamengo’s shape neutralising their adversary’s principal offensive threats, we were left with a fairly dull stalemate in the first forty-five minutes. In their 4-2-3-1, Fluminense’s biggest weapon is when their two attacking full-backs bomb forward, usually creating favourable 2 vs 1 situations on the flanks. However, Flamengo’s two more mobile midfielders Renato and Muralha often drifted out wide to shut down these attacks before they had a chance to begin, and with Maldonado as the spare man in the middle they were left well protected from any central threats.

So we came to half time with the scores still at 0x0 and neither side able to find that vital spark and pierce their opponent’s defences. It is worth considering that if this game had been played earlier in the season, it is almost guaranteed that the two teams would have returned for the second half playing the exact same way as the first, content with a draw, but with both teams chasing the championship, they each had to try to win and seize all three points.

It was Fluminense who grabbed the opening goal after 60 minutes, a lovely header at the back post from the in-form Rafael Sóbis. Flamengo’s marking left a lot to be desired however, right-back Léo Moura was caught flat-footed by the goalscorer Sóbis who ghosted past him on his way to the goal.

Realising what was at stake, Flamengo boss Vanderlei Luxemburgo took drastic and immediate action, making all three of his substitutions at once and setting his team out to attack. Maldonado, Diego Maurício and Deivid all made way, with Bottinelli, Negueba and Jael replacing them. 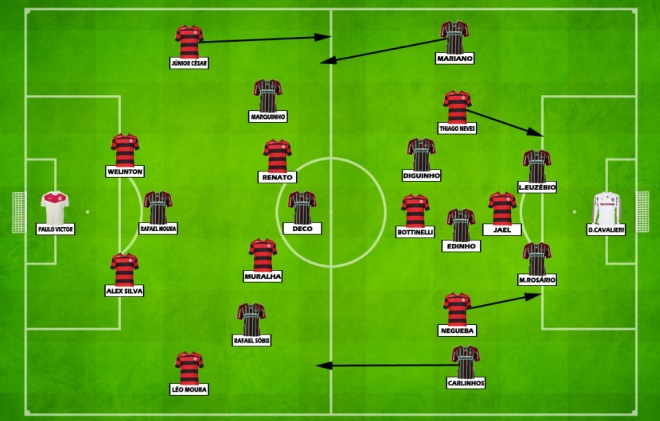 Gone was Maldonado’s holding defensive midfielder role, and instead Flamengo played with Bottinelli as a number ten behind the centre-forward Jael. Negueba replaced Diego Maurício and provided a much more direct option, as Negueba loves to take on defenders and make those incisive runs into the penalty area.

Then, just as Luxemburgo had done previously, Fluminense coach Abel Braga threw on all three of his substitutes, introducing fresh legs in attack and giving us a deliciously open game. Argentines Lanzini and Martinuccio were brought on for Deco and Rafael Sóbis, injecting a lot more pace to the Fluminense attack, perhaps looking to capitalise on Flamengo’s sluggish defending. However Fluminense’s key change was in the midfield, bringing on Souza for Diguinho. 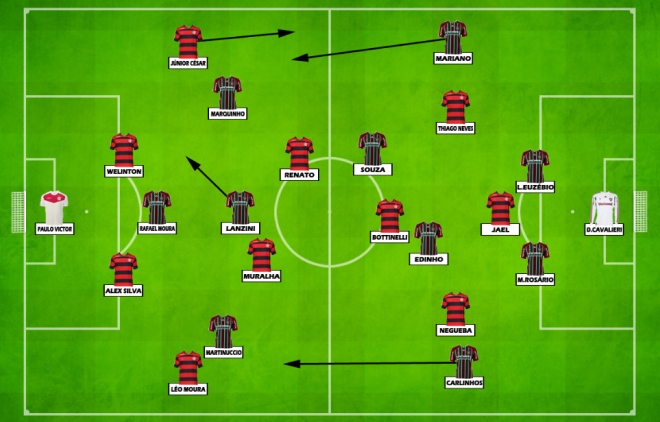 Fluminense’s familiar XI has Edinho and Diguinho playing alongside eachother in a midfield ‘double pivot’; the former as the deep-lying anchor man or primeiro volante, and the latter as the far more mobile segundo volante. Souza’s introduction saw him operate significantly higher than Diguinho usually does, allowing him to participate in attacking phases and occupy Flamengo’s midfielders. Another crucial point is that this modification liberated Edinho, bringing him out of his usual deep role and moving him into the midfield, but that will become more significant later.

As had been the case with every other tactical switch in the match, the adjustment worked very quickly and Fluminense took the lead again through another header, this time from substitute Manuel Lanzini. Again it has to be said that Flamengo’s marking was poor, but the opportunity only came about because of Souza drifting forward from midfield, and Lanzini darting into the box.

The game continued at a frenetic pace, and five minutes before the end Flamengo managed to equalise again. Substitute Dário Bottinelli was the scorer with a superbly struck long-range free-kick, but it was very fortunate to cross the line, after hitting the crossbar and rebounding back off of Fluminense goalkeeper Diego Cavalieri.

In dramatic fashion, Flamengo sneaked a winner at the death, Bottinelli scoring his second goal with a great strike from outside the area. His technique was superb and he left Cavalieri with no chance, but the fact that he was allowed the space to try the shot was more than likely as a result of Fluminense breaking up the Edinho and Diguinho partnership. In normal circumstances, the area in which Bottinelli unleashed his shot from would usually be marshaled by the deep-lying Edinho, but with Fluminense’s formation change this space was left vacant.

With seconds left to play, things got a little ugly. Souza was red-carded for an elbow on two-goal hero Bottinelli, Fluminense manager Abel Braga was incensed at the referee and was sent to the stands for his protests (although he refused to leave), and even after the final whistle Fluminense’s Rafael Moura spat at Renato Abreu, though he rather comically missed his target and hit his unexpecting team-mate Deco.

A truly fantastic second half and a very important result for Flamengo, propelling them to 4th place and keeping them in with a very real chance of winning the 2011 Brasileirão title. On Wednesday they take on Palmeiras at home, and then travel to Fortaleza to play Ceará.

Seven points behind leaders Corinthians and in 6th place, Fluminense’s hopes of a second successive championship still remain, but are fading fast. Far more realistic are their hopes of obtaining a Copa Libertadores qualification place, and with a fairly straightforward ten fixtures remaining, they appear to be a safe bet. On Thursday they host Coritiba, and then face Palmeiras on Sunday afternoon.

One thought on “Game of the Week: Flamengo 3×2 Fluminense”