Arsenal de Sarandí and Newell’s Old Boys contested an intriguing 1×1 draw in Buenos Aires on Monday evening, a result that could hold real significance in the 2012 Clausura title-race.

The Argentine ‘short seasons’ system is often criticised and even ridiculed in other parts of the world, but it does have its virtues. For those not completely privy to how things work in Argieball, the league season is split into two half-length seasons known as the Apertura and Clausura (open and close). In some other South American countries that use the short season format, the winners of each short season face one another to determine an overall champion, but in Argentina two champions are crowned per season.

The 19-game season allows for some ‘smaller’ teams to become champion, for example in the 2009-10 season where Banfield and Argentinos Juniors won the Apertura and Clausura respectively. This season, there is the chance of a similar ‘upset’ taking place.

With Apertura champions Boca Juniors’ 1×1 draw away to Belgrano on Sunday evening, rosarino side Newell’s Old Boys travelled to El Viaducto knowing that a win would take them two points clear at the top of the table with only eight matches remaining.

Their hosts, Arsenal de Sarandí also had their eyes on top spot, a home win would bring them level on points with leaders Boca Juniors, whom they faced earlier on in the year in the Copa Libertadores.

After a woeful Apertura campaign (in which they won only once and racked up a ridiculous thirteen draws, finishing in 18th place), Newell’s have really turned things around and with club idol and former Paraguay coach Gerardo “Tata” Martino at the helm, they may even end the season with silverware. Furthermore, considering Argentina’s promedio system of relegation (relegation is determined by team’s average points totals of the three previous full seasons), Newell’s Clausura surge takes on additional importance. 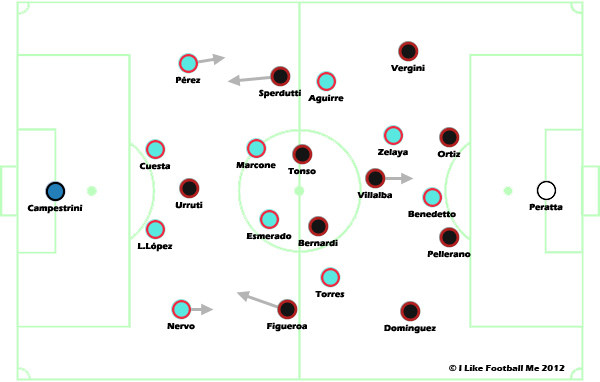 Arsenal boss Gustavo Alfaro lined his team up in their favoured 4-4-2 formation, but they were without centre forward Luciano Leguizamón (suspended) and tricky Colombian winger Carlos Carbonero (injured in training), so Dário Benedetto and Diego Torres came in to replace them.

Newell’s Old Boys came out in their now-default 4-1-4-1 system, with the excellent Raúl Villalba screening in front of the defence, and exciting centre forward Maxi Urruti leading the line on his own.

The first half was fairly even and entertaining, both sides managed to give good accounts of themselves without ever managing to control the match. Newell’s went into the dressing room at half-time as the better side, however they managed to pass up some fabulous chances on goal, the most dramatic of which a Urruti strike that smacked the crossbar, even after some wonderful close control from the 21 year-old forward.

The only goals of the game came within ten minutes of the restart, with the home side taking the lead in the opening seconds of the second half. It was a lovely move from Arsenal on the edge of the box, with Zelaya pulling Newell’s left back Dominguez infield before cleverly releasing Diego Torres down the right flank. Torres duly delivered a lovely cross into the area, turned into the net by Dário Benedetto’s shiny bald head.

Newell’s were slightly taken aback by the goal at such an early point in the second half, but they regrouped quickly and grabbed an equaliser less than eight minutes later. There was an element of luck in the goal, as it was an attempted clearance from Arsenal defender Lisandro López that struck one of his team-mates and fell kindly for Newell’s Víctor Figueroa to finish. Fortuitous perhaps, but it was a very intelligent probing run into the box by Figueroa that left him unmarked when the ball eventually arrived at his feet, and the 28 year old put the ball away with ease.

The match did begin to tail off slightly after that, but we were still treated to a great display of quick end-to-end football, with plenty of pressing and a fascinating battle in the midfield between Gastón Esmerado and the superb Newell’s captain Lucas Bernardi.

For me, the most interesting aspect of the match was how the two sides reacted to one another and adapted, particularly Tata Martino’s Newell’s Old Boys squad.

The animated diagram below shows how both sides set up when Arsenal (playing left to right) went on the attack.

As you can see, Arsenal pushed their talented wingers high up the field, while bringing Zelaya more central to offer them two attacking options in the penalty area. In response to this, Martino instructed defensive midfielder Raúl Villalba to drop back into central defence, moving his side seamlessly from the 4-1-4-1 shape into a defined 5-4-1. As a result, Newell’s were will protected in the middle, and the industrious Zelaya was thwarted from finding space in the channels and causing havoc.

The diagram below shows how the team’s set up when Newell’s went on the attack.

Arsenal’s plan here was straightforward, to arrange their defence and midfield into two flat banks of four, even bringing Zelaya back to help with defensive duties. Usually this would have been very successful against a 4-1-4-1 system with just one striker, but once again Martino’s side morphed into a different shape, becoming more of an attacking 4-3-3 with the wide midfielders becoming dangerous wingers.

In fact, NOB’s equalising goal came about as a result of this smooth transition, as Arsenal were unable to pick up the incisive forward run of left winger Figueroa, leaving him free in the penalty area to score.

The result meant that Newell’s Old Boys stayed at the top of the table alongside Boca Juniors, but they ultimately failed to open up a valuable two-point lead over los Xeneizes. The single point saw Arsenal rise to fifth place, and remarkably still only two points off Boca and NOB at the top.