Brazilian football is certainly not short on rivalries, ranging from the friendly to the somewhat poisonous. In São Paulo state, the most populous of Brazil’s 27 federative units, the biggest clásico is between Corinthians and Palmeiras, two blue-collar clubs with huge fan-bases. The state’s other two grandes – São Paulo and Santos – class Corinthians as their biggest rivals, but while the Timão are more bothered about their green neighbours across town, São Paulo and Santos have resolved to forge a rivalry of their own, the San-São.

While the San-São falls far behind the Dérbi Paulista (Corinthians vs. Palmeiras) in intensity and cultural importance, it often totally outstrips the Dérbi in terms of quality and excitement. On Sunday the two sides faced each other in the semi-finals of this year’s Campeonato Paulista at São Paulo’s Morumbi stadium, adding yet another decisive clash to the history of the San-São rivalry.

With both teams aware that they would avoid both Corinthians and Palmeiras were they to reach the final (both were eliminated by Ponte Preta and Guarani respectively, two fierce rivals from the paulista city of Campinas), this match was transformed into a ‘quasi-final’, with the winner guaranteed to be heavily favoured in the following week’s final.

The home side, São Paulo, were without star striker Luis Fabiano and Willian José started in his place as lone centre forward. Manager Emerson Leão set his side up in a 4-3-2-1 shape, with Jádson and Lucas as the attacking midfielders.

Santos were without their two first-choice fullbacks Juan and Fucile, so veteran Léo and youngster Maranhão filled in at left and right back respectively. Furthermore, Muricy Ramalho decided to drop last season’s top scorer Borges from the starting eleven, instead selecting the more industrious Alan Kardec. Santos lined up in a 4-3-1-2 formation, keeping the system they have used faithfully throughout the season. 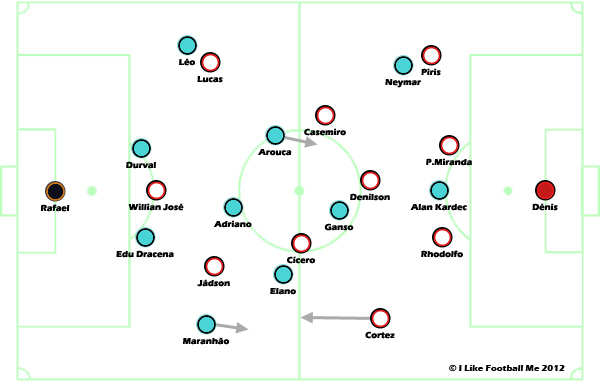 The first half was a strange one, with São Paulo having most of the ball and applying most of the pressure, yet returning to the dressing rooms two goals down. The first goal came from a penalty kick within the first few minutes of the match, with centre-back Paulo Miranda adjudged to have fouled Alan Kardec after he was played through on goal by the charging Arouca. Neymar duly dispatched the penalty into Dénis’ right hand corner, sealing his 100th career goal for Santos.

The second goal arrived with just over thirty minutes on the clock, once again from a Santos player being played through on goal, though this time the recipient was Neymar from a Paulo Henrique Ganso pass. The São Paulo defence appeared to open up completely, handing Neymar the opportunity to skip past them, before slotting the ball coolly past Dénis for number two.

The most interesting thing to notice during the first half was how similar these two teams are in midfield and attack. Both sides work from a base of three midfielders with one holder (Denílson/Adriano), a deep playmaker (Casemiro/Elano) and a box-to-box runner (Cícero/Arouca). Further forward they both play with a traditional number ten (Jádson/Ganso), a young centre forward (WIllian José/Alan Kardec) and the supremely talented winger (Lucas/Neymar).

The main difference however, was in the two sides’ defences. Whereas on one hand Santos’ back four were organised, calm and marked well, São Paulo’s defensive line were all over the place, never knowing where to position themselves and offering Santos’ forwards countless gaps to exploit.

This was partly down to the fact that São Paulo coach Emerson Leão chose to instruct Paraguayan right back Iván Piris to man-mark Neymar, attempting to silence South America’s best player. This was rather predictable, considering that many believe Piris was only signed by São Paulo after they saw him successfully mark Neymar out of the game during a Copa Libertadores tie for his old side Cerro Porteño.

Neymar – now well accustomed to dealing with man-marking – took Piris to the cleaners, turning him inside and out and dragging him out of position on several occasions. The best example of this came in the build-up to Santos’ second goal, which I will attempt to illustrate in the animation below:

As the diagram shows, Neymar decides to come short for Maranhão’s throw-in on Santos’ right flank, dragging Piris along with him. When the throw-in is half-cleared by São Paulo centre-back Rhodolfo, Piris takes his eye off his marker and by the time Paulo Henrique Ganso controls the ball in the midfield, Neymar is already a good 8 yards away from the Paraguayan.

Ganso’s intelligent through ball completely takes Piris out of the game, and it is then left to hulking centre-back Paulo Miranda to try and keep up with Neymar. Predictably, the fleet-footed forward skips past Miranda with ease and finishes well.

Neymar does not need much space to terrorise defences, but up against this kind of defending, it was surprising that he did not score even more.

Recognising that they were in real trouble, Emerson Leão decided to make two substitutions at half-time, bringing off Jádson and Piris for Fernandinho and Rodrigo Caio. The last time I covered São Paulo, in February’s 2×2 draw with Palmeiras, Leão decided to make the same switch, bringing off Jádson to replace him with Fernandinho. At the time I put Jádson’s poor displays down to the fact that he had not yet readjusted to the Brazilian domestic game, but two months on, warning bells are starting to ring.

The other substitution was a little more obvious, as Piris had already picked up a yellow card while marking Neymar.

With the slight change of approach, São Paulo really improved in the second half and controlled most of the play, although they found things slightly difficult in front of goal. They did eventually score through Willian José (albeit he was half a yard offside), and threatened to grab an equaliser.

Their hard work was undone however after Neymar grabbed his third goal of the afternoon, thanks in part to a horrendous goalkeeping error from São Paulo’s Dénis. Not long after the third goal, São Paulo’s Cícero was red-carded for a second bookable offence (perhaps harshly) and the game was put beyond doubt.

Santos progress to the final to take on Guarani, who defeated their fierce rivals Ponte Preta by the same score in the wonderfully named Estádio Brinco de Ouro da Princesa (The Princess’ Gold Earring Stadium) in Campinas.