To those with a cursory interest in Brazilian football, Marcelo Oliveira’s dismissal from Coritiba after two difficult away defeats may have seemed like rash decision making on behalf of the Paraná club, and yet another stock example of a Brazilian team giving their manager his marching orders at the first signs of tribulation.

However, this couldn’t be further from the truth.

Unlike Branco at Figueirense1, Adilson Batista at Atlético-GO, and Falcão at Bahia (this list could continue for days…), Marcelo Oliveira was given the time and freedom in which to do his job at Coritiba. In his 21 months in charge of the Coxa-Branca, he managed to implement and develop a project – a word seen as blasphemy by some other football clubs in the country2.

By all accounts, Marcelo Oliveira’s dismissal was amicable, with both parties feeling that the 57 year-old had taken Coxa as far as he could.

When he took control back at the start of 2011, Coritiba had just won the 2010 Série B and gained promotion back to the top table of Brazilian football. Marcelo’s side built on the strong foundations left by previous coach Ney Franco, and in his first year in command Coritiba strolled to the Paraná state championships (Campeonato Paranaense), were beaten finalists in the Copa do Brasil, and finished 8th in the 2011 Campeonato Brasileiro, narrowly missing out on Copa Libertadores qualification.

In the midst of all of this, the Coxa-Branca managed to string together 24 straight victories, a feat that earned them a place in the Guinness Book of World Records.

Things started positively in 2012, as Coxa once again clinched the Campeonato Paranaense and once again progressed all the way to the final in the Copa do Brasil. However, after losing the final in July at the hands of Luiz Felipe Scolari’s Palmeiras, team morale took a crushing blow and their progress stalled.

The man chosen to replace Marcelo goes by the name of Marquinhos dos Santos – a youth coach with minimal experience and reputation at senior levels, but someone well known around Coritiba’s Bayard Osna training complex. In between stints managing Brazil at both U-15 and U-17 levels, Marquinhos was also the coach of Coritiba’s U-20 team – a side that included many of the young talents in the current Coxa-Branca squad.

At 33 years old, Marquinhos is the youngest coach in the league3 and his lack of experience at senior level has led many to intimate that he is too green for the top job. Whether that proves to be true or not is still unclear, but the coxa-branca support can be certain that they have a coach who is already familiar with the Coritiba set-up, and will be given time to prove himself.

Marquinhos’ reign has got off to a great start, with a persuasive 3×0 home victory against an altogether abject Flamengo side. Though they did not need to exert themselves too much to win, Coritiba looked self-assured and united as a group, and they attacked with verve.

A quick glance at Coritiba’s playing squad reveals a variety of interesting attacking talents and some healthy strength in depth at key positions (although they have been left rather light at full back with the sales of Jonas and Lucas Mendes to Vasco and Olympique Marseille respectively). Despite not being one of the country’s traditional giants, the Coxa-Branca have a squad that is arguably capable of competing at continental level, far superior to some of the clubs languishing around them near the relegation zone of the Campeonato Brasileiro.

After a tricky first half of the league season, if Coritiba can build some momentum they can expect a respectable finish and a place in the 2013 Copa Sul-Americana.

However, if I was in Marquinhos dos Santos’ position I would explore the possibility of altering Coxa‘s playing style and formation.

Their current 4-2-3-1 system (left) has served them well, but with the loss of important midfielders Léo Gago and Leandro Donizete this year, they have been left weak in the centre of the pitch and have been forced to look towards their youth ranks. Their lack of command in centre midfield means that they are often restricted to attacking on the break. 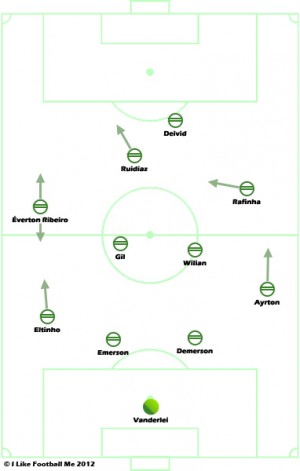 My suggested solution would be to set the side up in a 4-4-2 shape (right), with the wide creative players tucking in to a line of four when without the ball, and cutting inside as playmakers when in possession. This system would also allow for the integration of new signing Raúl Ruidíaz, the speedy Peruvian forward signed from Universidad de Chile last month.

A switch to a 4-4-2 as illustrated above would provide them with the necessary cover in midfield and allow them to work with possession a little more. Their wide range of attacking substitutes would also help them to keep their opponents on their toes.

Whether 4-2-3-1 or 4-4-2, it is certain that Coritiba have a squad of real potential and quality, and if they follow the same formula of the past few years, they are certainly the team to watch for the near future.

1 Branco’s two successors at Figueirense met the same fate, and they are now on to their fourth head coach of the 2012 league season.

2 With the exception of Corinthians coach Tite, who has formed one of the most successful projects at club level in Brazil in the last few years.

3 The next youngest is Internacional’s Fernandão, at 34 years old.

2 thoughts on “Meet the new boss, same as the old boss.”