In Brazilian football, coaches are scandalously overvalued. Tite, manager of league leaders Corinthians, earns a reported R$ 500,000 (approximately £85,000) a month. The league’s best player, Renato Augusto (once of Bayer Leverkusen), earns R$ 100,000 less. Corinthians have many players on salaries between $ 400,000 and R$ 500,000, but no-one earns as much as the coach.

The root of this skewed economy lies in the regularity with which teams change coaches. After 28 rounds of play, this year’s Brazilian championship has seen 24 managers sacked or resign. Only four teams have yet to substitute their head coach. END_OF_DOCUMENT_TOKEN_TO_BE_REPLACED

The quarter finals of Brazil’s domestic cup competition, the Copa do Brasil, get underway this midweek. Recently adapted to include all top-flight teams (those participating in the Copa Libertadores were previously exempt) and align its final stages to the last few months of the league season, the Copa has become one of the biggest attractions of Brazilian football’s long and packed calendar. It provides full stadiums, quality football and quenches the Brazilian fan’s thirst for knockout tournaments.

The Copa do Brasil is quite different from most of the traditional European domestic cups, owing more of a debt to Spain’s Copa del Rey in its two-legged format. Major upsets are rare, while the idea of a “cup run” is alien. Due to Brazilian teams’ overcrowded fixture lists, competing seriously in the Copa is a calculated choice as opposed to naturally building momentum.

Challenging in both the league and cup is difficult. It is no coincidence that at this late stage in the tournament, Corinthians and Atlético Mineiro, 1st and 2nd in the league, are already eliminated from the cup. END_OF_DOCUMENT_TOKEN_TO_BE_REPLACED 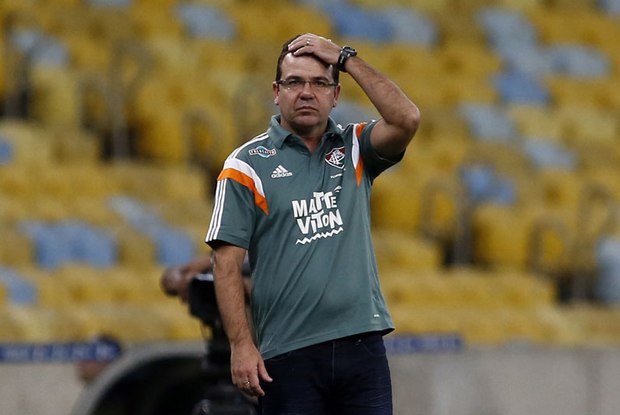 After losing 4-1 at home to Palmeiras on Wednesday, Fluminense dismissed head coach Enderson Moreira with just under three months of the season remaining. Less than 24 hours later, they announced Sport Recife’s Eduardo Baptista as his replacement. The team’s form has dipped sharply, from top four challengers to winning just two of their last 13 league matches. They currently lie in 11th place and rock bottom of the form table.

This is hardly surprising when you consider that Fluminense have just hired their third different head coach of the league season, their fourth in 2015. END_OF_DOCUMENT_TOKEN_TO_BE_REPLACED

Yesterday I had the pleasure of interviewing Juca Kfouri, a living legend of Brazilian journalism. As editor of the iconic weekly (now monthly) sports magazine Placar and later of Playboy, Juca worked tirelessly throughout the 1980s and 1990s to investigate and expose corruption in Brazilian sport.

Being an investigative sports journalist in Brazil was a thankless task back then. Brazilian society treated the idea of corruption in sport as a wacky conspiracy theory, most likely due to decades of the public being sheltered from government corruption under the military dictatorship (1964-1985) and its tight grip on information.

This changed in 2001 when Congress opened two separate parliamentary inquiries (CPIs) into corruption in football. The first, in the lower house, aimed at the sponsorship contract between Nike and the Brazilian FA (CBF), leaked to the press in 1999 and suspected of “violating Brazilian sovereignty”. At the same time, another CPI was opened in the Senate, going after club presidents and the CBF itself.

Due to pressure from the so-called “football caucus”, the CPI in the lower house was not approved. Yet the Senate CPI survived and made a host of indictments of 17 important figures in the national game, including then CBF president Ricardo Teixeira, current and ex-presidents of Vasco da Gama, Flamengo, Santos and even national team coach Vanderlei Luxemburgo. None of these accusations were taken any further though, due to what Juca calls the “slow, morose” Brazilian judiciary. The national team’s success in the 2002 World Cup also served to deflect bad press away from the CBF. END_OF_DOCUMENT_TOKEN_TO_BE_REPLACED

Roger Machado’s exciting Grêmio side have surely been the story of this Brazilian season, though they have seen their title chances slip away this week after disappointing results against Corinthians and São Paulo.

At the start of the championship, Grêmio were touted as relegation candidates, with then manager Luiz Felipe Scolari playing a most uninspiring and cynical brand of football, with no individual talent to back it up.

The tricolor drew their opening match at home to Ponte Preta before losing away to Coritiba. Felipão, sensing his position was under threat, resigned and headed off to China, leaving Grêmio without a coach less than two weeks into the league season.

With no money in the bank to bring in a big-name replacement, Grêmio looked down the leagues and brought in the relatively untested Roger Machado, a former player of the Porto Alegre side in the 1990s.

Roger hit the ground running, winning seven of his first ten matches in charge. Meanwhile, he managed to find a playing style to suit his squad, focusing on speed, transitions and rapid passing – exactly what Brazilian defences have the most trouble with. END_OF_DOCUMENT_TOKEN_TO_BE_REPLACED

Palmeiras earned an important home victory this evening, beating struggling Figueirense 2-0 in São Paulo. Both goals came in the second half – the first from a corner kick and the second from the penalty spot.

The scoreline was misleading though, as Palmeiras delivered yet another below-par performance.

A look at the cold, hard figures would suggest Palmeiras to be one of the most dominant sides in Brazil. They boast the league’s best attack with 41 goals in 25 games, while their shots on target ratio (shots on target for/shots on target against, a reliable indicator of team performance) is 1.48, also the best in the league. Against Figueirense, they had six shots on target to the away side’s two.

Yet they sit in fifth place, outside of the top four and 13 points behind leaders Corinthians.

So what is to blame for their underwhelming league position? Arguably, their form has dipped just as their rivals have improved. END_OF_DOCUMENT_TOKEN_TO_BE_REPLACED