One of the more frustrating clichés in football is that on derby day, the form book goes out of the window. Derbies are different, but only because of the increased levels of pressure. The way in which the players deal with this pressure often has an impact on the final result, though that applies to any match against any opponent.

When faced with the prospect of playing against their rivals, some professionals are able to build themselves up mentally and use the increased adrenaline to produce higher levels of substances that enhance performance, like a form of emotional doping.

Others can be overwhelmed with nerves and opt instead to hide on the field, afraid of making a mistake. There is a Japanese proverb that says “the stake that sticks up gets hammered down”.

This weekend in Brazil we were treated to three clássicos that did a good job of illustrating exactly why playing your rivals is so important.

On a historic run of eight defeats in a row, São Paulo managed to stop the rot with a 0-0 draw against Corinthians. With confidence at an all-time low and coach Paulo Autuori’s job hanging by a thread (after only four matches in charge), São Paulo’s prime objective was not to concede and therefore, to avoid a ninth consecutive defeat.

Autuori dropped World Cup winner Lúcio from the centre of defence after a series of bad performances and repeated indiscipline. Though it is impossible to doubt Lúcio’s quality, São Paulo looked more secure without him. His absence allowed Rafael Tolói to return to the right centre-back role where he is most comfortable, and it gave their defence more shape and discipline.

São Paulo started the match with three defensive midfielders and though they did have space to attack into (Jádson and Fabrício often had two-on-one situations in the middle against Corinthians midfielder Ralf), they did not seem interested in bringing numbers forward.

Corinthians were in control for most of the match and kept the play in São Paulo’s half, but they didn’t create many clear chances and appeared to believe a goal would come along naturally. Alexandre Pato was once again disappointing coming off the bench, and many in Brazil are now coming to terms with the fact that he will never become the excellent forward they once thought he was.

Corinthians appear to be on auto-pilot mode in the Brasileirão and they have dropped far more points than expected at this early stage. They will most likely focus heavily on winning the Copa do Brasil to ensure a place in the 2014 Copa Libertadores.

It wasn’t another defeat, but São Paulo have now gone twelve matches without a win, and they now embark on a trip to Europe and Asia to play the Audi Cup and Suruga Bank Championship respectively, facing teams like Bayern Munich, Manchester City, Milan and Benfica. That winless streak will probably go on a bit longer.

In Belo Horizonte, Cruzeiro battered Atlético-MG 4-1, only days after watching them lift the Copa Libertadores trophy. Still in the party mind-set, Atlético fielded a largely second-string side, with only Júnior César and Michel remaining from the team that beat Olimpia in midweek.

Often when a squad is as close-knit and successful as Atlético’s, the reserve players are able to step into the first team and perform well, having trained side-by-side with the starters on a daily basis. However, Atlético’s sluggish centre-back partnership of Gilberto Silva and Rafael Marques struggled against a dangerous Cruzeiro team.

Since last season, Cruzeiro have conducted some superb business in the transfer market. Dedé, Nílton, Souza, Éverton Ribeiro and Dagoberto are all top-level Série A players, and their attacking unit has plenty of depth with Luan, Ricardo Goulart and Martinuccio keeping the starters on their toes. The signing of Júlio Baptista could also be decisive, and If they can keep him fit he should do well on his return to Brazil.

At this stage, Cruzeiro is one of the three or four teams who has what it takes to win the Brazilian championship.

The third match, Flamengo versus Botafogo, was a fascinating game in the new Maracanã. However the event raised further questions about the “elitization” of the Brazilian game, about which I would like to go into more detail tomorrow.

Finally, I would like to pay tribute to Ecuadorian forward Cristián Benítez, who died today in Qatar, aged just 27. Benítez was a wonderful, intelligent and powerful striker who could lead the line on his own and was a class-act on and off the pitch. Earlier this year I suggested he would be reaching his peak just in time to lead his nation in the World Cup in Brazil next year, so it is hard to fathom that he is now no longer with us. My thoughts go out to his family, friends and team-mates.

Adiós Chucho, you will always be remembered. 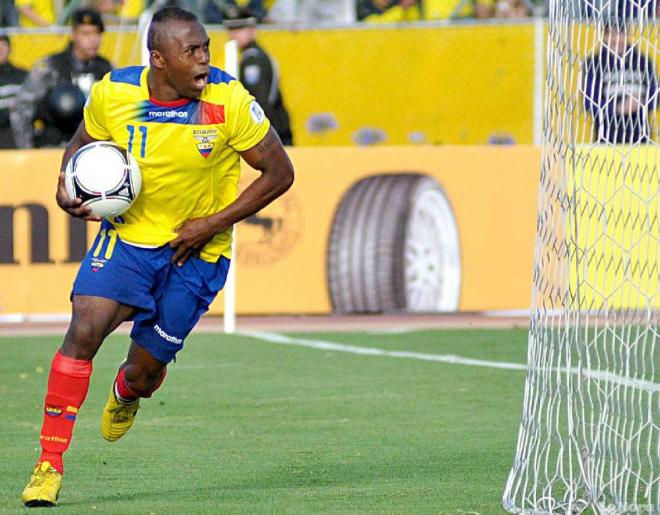